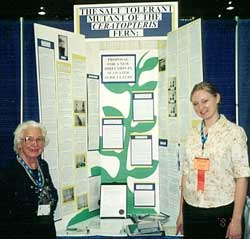 Marie Sherman, Science Teacher at Ursuline Academy in St. Louis, MO, announced that one of her senior students, Ms. Laura Ernst, won a second in the Grand Awards at the Intel International Science and Engineering Fair held in Detroit, MI in May, 2000.

Ms. Ernst placed in the top five out of a total of 88 entrants in her category (Botany). As part of her studies at Ursuline, Ms. Ernst did a two-year project for Independent Science Research using C-Fern. Comparing the growth of wild type and salt tolerant C-Fern mutants (strain stl2 ) in 0%, 25%, 50%, 75% and 100% sea water, she found that the 25% and 50% groups grew surprisingly well. She then analyzed the tissues from each group for chloride, calcium, Vitamin C and chlorophyll content. This gave her some interesting data for graphs and extended analysis. Ms. Ernst received $1,500 in prize money! In Fall 2000 she will attend Washington University (St. Louis) as a freshman majoring in Biology with a specialty in Botany.